What is Thicker Than Blood?

My new International thriller, Thicker Than Blood, is close to my heart. As fiction, inspired by real events, many are asking how much of the story is true and how much is not. That’s a tricky question. Here is an excerpt from “an interview with Dr. Bailey Pogue,” the book’s protagonist. 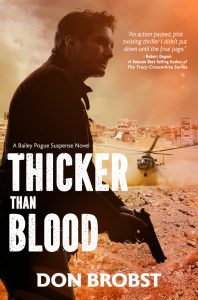 Several years into private practice, I became acutely aware of human trafficking and its impact on families in America as well as the rest of the world after discovering that someone I knew well, or thought I did, was involved in this horrific activity.

As a result of my friendship with the individual, authorities pulled me into the battle against underage abductions from the streets of our cities. I have to admit, I was skeptical that such a heinous problem could actually occur right here in this great nation, but it can—and it does.

Once confronted by the facts, I was unable to turn my back on the battle and my responsibility to do something urged me forward. I found myself up close and personal with those who forced this plague onto innocent, young girls. I had a responsibility to do what I could to stop what I could. It wasn’t easy. Walking down that one-way path came with a very steep price. It cost me in many ways and changed me.

Working undercover is difficult, especially when the scope of the required duties expands as new problems arise or previously undisclosed information changes the course and urgency of the investigation. Ask any federal agent. Before I realized it, I was entrenched in political espionage as well as human trafficking. Over a period of years, as my position placed me at an ever-increasing risk of harm—or worse, it levied a significant strain on my family as well. Then, without warning, their safety was in jeopardy. That had never been part of the plan.

But I had a problem. It wasn’t the fault of the girls, or my kids, or anything I had done. But it was in my power to help them. Proverbs 24 states:

10 If you falter in a time of trouble,
how small is your strength!
11 Rescue those being led away to death;
hold back those staggering toward slaughter.
12 If you say, “But we knew nothing about this,”
does not he who weighs the heart perceive it?

Does not he who guards your life know it?
Will he not repay everyone according to what they have done?

There is much to lose, but there is so very much to gain.