The Perfect Storm in Africa 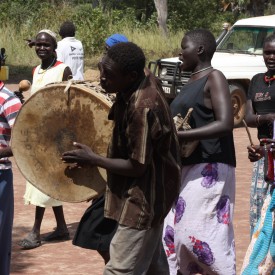 As we entered each village, the local inhabitants greeted us with singing and dancing.

They were thanking God for sending them help—help they’d prayed for, for their children, for their sick, for their community. If that doesn’t humble you, nothing will.

They told us we were an answer to prayer. How can that be, I wonder? I am a man just like the men of the village, but I live in luxury, never worry about my next meal, and rarely fear for my life. No animals invade my yard and threaten to harm my children or me. Never do I have to walk more than a few feet for unlimited, clean, fresh water—let alone 7 miles as they do.

This is real life for the people here, scratching out an existence of survival in a harsh but beautiful countryside. Now, they must also fight their own people trying to rape and pillage their communities.

The diseases there are intense. Every family is plagued by illnesses from internal worms to life-threatening dehydration, or the most common—malaria.

A young mother brought her baby girl to us—she didn’t respond to anything I did, and laid lifeless in my arms. My heart sank as we began treatment for her main problem—she was so dehydrated we had to give fluids with IV’s and a gastric tube just to give her a chance. After three hours, she was awake and mad! We thanked God for the reprieve.

As we treated malaria, skin infections, parasite infestations and malnutrition, it was the children—the masses of children that stole our hearts forever. They were ill, yet they smiled brightly. They lived with fear daily, but they allowed us to hold them in our arms and hug our necks.

We will never be the same, nor should we be. We have seen God’s touch on these wonderful, precious people even now as they struggle daily to survive.

When we finished seeing illness for the day, the women of the village insisted on providing a meal for us—a meal they couldn’t afford, but upon which they insisted. They gave us the best that they had, and never complained. They considered it an honor to provide for their guests—another incredibly humbling experience.