How Do I Help This Child?

I took this photo in a world where nothing makes sense. Filth, disease, and devastation surrounded me. Then . . . this little boy smiled at us. 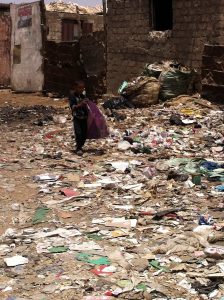 I want you to know who this little guy is. This was taken in a region of Africa where I frequently work. But it’s not what the actual city looks like.

Just outside municipal limits, five “garbage cities” busily and faithfully collect and process trash from the region of more than 17 million people. Most estimates are more than 27 million due to commuting from suburbs. Each one of these “cities” is an independent community in itself. Some are smaller than others—several are quite large and industrialized.

Many citizens occupy each garbage city—they work, eat, sleep, marry, raise children, and go through life within the confines of its walls. The people living there are not derelicts of society or deadbeats that refuse to work. On the contrary—they are some of the most hardworking, respectable people I’ve ever met.

The bags carried by the boy in the photo are filled with rags and cloth that will be carried by hand or cart back into the city to sell to industry. This is one way they make a living day to day.

Adults and children sort through the trash, separating out anything that can be reused, reprocessed, or melted down. One group of workers repairs shoes and clothing to sell on the streets of the nearby city, another gathering of children empties partially filled shampoo bottles into a single one so they can sell that to people at traffic lights. Others gather paper and magazines into bundles to sell to the paper mills.

There’s no electricity, running water, heat or cooling. The summer is hot and the winter cold, but they go on doing what they need to do. In spite of the fact that they have nothing to offer, the little boy in this picture offered me a drink from a bottle of water. It was less than half full, but it was all he had and he offered it to me.

These precious people asked for one thing from us—to teach them to suture their wounds so they would be equipped to care for their community, and perhaps prevent death from infections. Several die each year because of wound infections because they have no medications or a way of repairing lacerations, which at times are severe. Most of those are children.

Working hard in order to move out of garbage city is not an option. If you are born within its walls, you are likely to remain there your entire life—that is simply the way it is. They don’t complain—they’re happy to be alive.

The boy in the photo is a Christian because someone cared enough to go there ahead of us—to carry the Gospel to a strange, unpleasant place. But one may wonder if it will last in such an extreme location.

The fact is, as I took the photo above, I stood with my back to the church they were building with their bare hands from discarded bricks—in the middle of Garbage City. There are now 1000 Christ followers in this community and 2000 Muslims. They are reaching out to their neighbors to bind their wounds, and touch their hearts.

Give up something. Pray. Go.