Blackhawk Has The Final Word 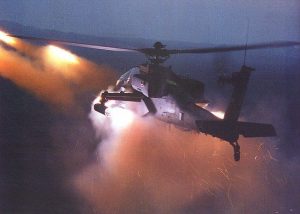 The war zone atmosphere filled the night air as Dr. Paul Branson and the Special Forces searched for a way out of the compound. But they were suddenly trapped.

Murdock, seasoned pilot of the Blackhawk chopper found a way to even the odds from above the trees.

The vehicle they needed was close by, but unless they could manage the ground troops, there would be no escape.

Branson had known these men for only a few minutes, but that was all he needed.

The deadly thunder of the Black Hawk’s fifty-caliber machine guns firing into the cinder blocks forced men to dive for cover. Dirt filled the air, and boards splintered as Murdock wreaked havoc on the building below.

When Murdock paused, Jake sprinted for the entrance, shooting his way through the dangling remnants of the garage door. An explosion of automatic gunfire lit up the room inside, then it fell silent again.

Branson and his brave team embark on a heroic mission of hope, adventure, and intrigue in this thrill ride. You don’t want to miss this story of real people fighting for their lives.

The Ghost of Africa is on sale on Amazon today.