Miju — The Man Behind the Man 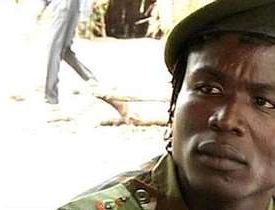 Behind every good man there’s a good woman.

Behind every sinister man there’s another sinister man. That’s the way it works. Rarely will you find a wicked woman pushing, urging, championing an evil man, but he often finds a kindred spirit to help him.

In The Ghost of Africa, the man behind the man is Miju.

Miju was born in the Congo, but migrated to Sudan where he developed his own ruthless reputation. Once he teamed up with Jason Quinn from the LRA, it was all down hill for the villagers.

Trained in weapons and never shying away from a fight, Miju doesn’t like anyone very much. Although he’s a follower and supporter of Quinn, he thinks for himself. As a result, he is a man with whom to be reckoned.

Miju must have noticed the smile. “You have your work cut out for you, Doctor. Stick to that, and don’t try making friends here.” He went back to work with the honing stone. “I told you before to mind your own business.”

Paul glanced at Miju’s pocketknife. “How sharp can you get that?” Paul continued to ladle water from the pot, peering in to see if it was the right amount.

“Sharp enough to cut a man’s throat with one stroke.” Miju held the knife to his own neck for effect.

Paul tried to ignore the threat but knew better than to dismiss it. “When it’s ready, drop it in here.” Miju didn’t acknowledge the instruction.

Miju, like Quinn, is a powerful foe. He knows what he wants, or at least he thinks he does, until he begins to see the full picture.

Dr. Paul Branson is just a doctor to most, but to the people who need him, he becomes much more. In order to save thousands of innocent lives, he will have to conquer not only Quinn, but Miju as well.