Escape from the LRA 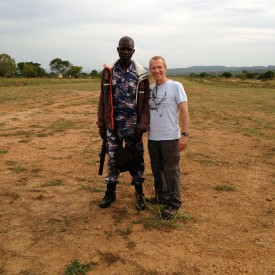 When I first met the man I had no idea that his background would shock me.

We began talking as he guarded the young teens on the school compound in his blue, military fatigues. Mountains surround the remote area of Arua in South Sudan, and to land on the airfield is a challenge. Not so much because it’s bumpy – all airfields in Sudan are bumpy. This makeshift runway was difficult primarily because it is carved into an upward slope.

As Kariem stood facing the compound, he held an automatic rifle in his right hand with a small grenade launcher on his left shoulder. A satchel of grenades dangled from his belt.

I asked Kariem if he had been trained in the military of Sudan. He laughed and explained that his military experience came from a much less acceptable source. As a child, members of the LRA had kidnapped him from his home after his parents had been brutally murdered and his younger sister raped repeatedly in front of him.

As we talked, Kariem shared the atrocities he witnessed that day and the brutality that followed for years to come as Joseph Kony and the LRA taught him to be a boy soldier.

Kariem was quick to inform me that he had never raped anyone, but because he had no choice, he had been forced to murder innocent people. He explained that he knew, even at the time, that what he was doing was wrong. But he also knew that he must choose the proper time to escape.

I can do all things through Christ who strengthens me!

For Kariem that opportunity came when he was 22. With only his rifle and the clothing on his back, he escaped from the LRA, moved to Uganda where he would not be discovered, and later made his way back to Sudan to live a proper life. He smiled as he described his wife and three children, and told me that he knew he had a debt to pay even though he did not choose the life into which he had been thrust.

I marveled at Kariem’s resolve and candor. He now lives his life protecting others from the organization of which he had once been a member. As I pulled myself back up the ladder into my airplane, he called to me. I’ll never forget the words he shouted.

“I can do all things through Christ who strengthens me!”

As my plane lifted off the runway moments later, he waved from the sidelines. I waved in response, knowing that I would likely never see him again. But in the brief moments I knew him, he inspired me forever.