The Heart of a Terrorist 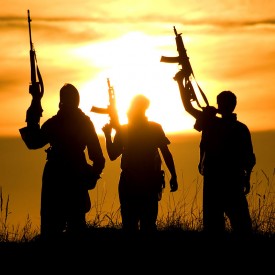 As I crossed the street to the market, a young man approached me with an assault rifle strapped across his back. He wrapped his arm around my shoulders as if we were friends, pointed to a young couple in the market and asked me a question.

“Do you think she’s dressed appropriately?”

I looked at the young woman, apparently the wife of the man with whom she was shopping.

“Why?” he asked as he took his arm from my shoulder and faced me.

“She isn’t dressed in accordance with your culture. Her shirt is sleeveless, her dress is at her knees instead of below them, and her head is uncovered.”

The young man studied me briefly, then smiled and grabbed my arm. “I am Mohmed. Come with me.”

I cringed inside, but had no choice but to accompany him. As we approached the couple, the husband, aware that we were headed their way, became suddenly jittery. I feared he might grab his wife and run, but instead, he froze, took her arm, and pulled her close.

Mohmed spoke to the man, “Why is your wife dressed this way?”

The husband seemed incapable of responding at first—more than likely from fear. Mohmed spoke again. “Answer me.”

The husband finally responded. “Because it makes her feel attractive.”

Mohmed gazed at the ground as if trying to control his anger. “If you want her to be attractive to other men, that makes her a prostitute. Is she a prostitute?”

I’ve never felt more out of place than I did at that moment. There was no retreat possible. The husband stammered. “No. She’s not a prostitute.”

People began to gather near us as Mohmed ordered, “You will take her home now and she must never dress this way again. Do you understand?”

The man nodded. “I understand.” He took his wife’s arm and began to walk away.

“Wait,” Mohmed called after him, perhaps to impress the gathering crowd, some of who were shouting at me. The couple walked back as the wife avoided eye contact. Mohmed then said something I’ll never forget. “She must be punished. I will strike her, or I will strike you,” he said to the man. “Choose.”

Without hesitation, the husband responded. “Strike me.”

Mohmed looked at the woman indignantly. “Your husband is willing to be punished for your foolishness.” With that, he slapped her with his open hand hard enough to knock her to the ground.

I grabbed his wrist. I don’t know why, I just did. It was a reflex, or a conditioned response, or something. Seeing a woman struck triggered a reaction for which I was unprepared. But the moment I grabbed his hand, I knew it was a mistake. Mohmed had a rifle. It was his country. We were playing by his rules. There must be at least a dozen more reasons. He glared at my hand as I let go.

“Why would you do this?” He appeared genuinely amazed.

“Everyone deserves forgiveness,” was my initial response. Then I added, “We don’t strike our women.”

“Forgiveness is not granted, my American friend—it is earned.” When he said the word earned, he spat on the ground as his face hardened toward me. The silence that followed seemed to last an hour, although it must have been only seconds. The husband took the opportunity to help his wife from the ground and leave. More people gathered.

As I pondered my predicament, I couldn’t help but recognize the correlation. Christ took the punishment for my sin, but Satan was not given the opportunity to choose between Jesus and me. He has to obey God’s rules, and for that I was thankful.

After what seemed an eternity, Mohmed began to walk away, then stopped and turned. “Your god is weak. That means you are weak. You’ll never defeat us because god is on our side.” He stood a moment. “You must go. Don’t come this way again.”

He watched as I crossed the street again.  When I looked back, he was gone but the crowd remained. My heart is still heavy for him.