Suffering For the Cause 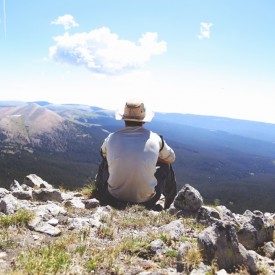 At times I wallow in self-pity. I don’t like that about myself.

I’d like to be the guy who stands at the summit waiting for others to catch up to him, but that isn’t me. In fact, without inspiration and encouragement from friends and Scripture, I’d be in deep trouble.

This has been a particularly bad week. Those who have assaulted my character and threatened to prevent me from helping others in distant regions have attacked me on a number of fronts. These individuals do not care about the lost, poor or needy. Their value systems and moral compasses are so askew that finding their way out of a Wal-Mart would be a challenge.

As I ponder my predicament and nurse my wounds, I’m reminded of Hadib, a man I met last week. We shared an interesting circumstance—we were both in a part of the world where we were not supposed to be. But that’s not where the similarity ended. We also served a God that not everyone serves. In fact, most in that region don’t.

For me, that presents an inconvenience that prevents me from sharing my faith under their laws. For him, his very life depended upon his loved ones not discovering his location. If they did, they would arrange his death.

When I look at life through the eyes of Scripture, I realize I have never suffered once in my life.

In Scripture, the Apostle Paul tells his dear friend Timothy to,

Be sober-minded, endure suffering, do the work of an evangelist, and fulfill your ministry.

When I ponder my “suffering”, it is nothing compared to that of Hadib. He has no future other than keeping one step ahead of his family. His suffering is real. It is akin to the suffering of Paul and Timothy. Mine is simply an annoyance.

Do not be anxious about anything, but in everything by prayer and supplication with thanksgiving let your requests be made known to God.

In my situation, my instructions are to do what Paul says in his letter to the church in Philippi above. For Hadib, the suffering is not that simple.

You who have made me see many troubles and calamities will revive me again; from the depths of the earth you will bring me up again. You will increase my greatness and comfort me again.

When I left Hadib a week ago, he wanted me to remember those who were suffering persecution in his homeland. He didn’t request protection for himself, or for his suffering to end. He asked for strength to endure what God had planned for him so that he wouldn’t fail. He also asked for strength for his people, and for the salvation of the very family members that were seeking his demise.

When I look at life through the eyes of Scripture, I realize I have never suffered once in my life.