THIS IS WHY WE GO WHEN GOD SAYS “GO”

A friend asked me why my faith is so strong. 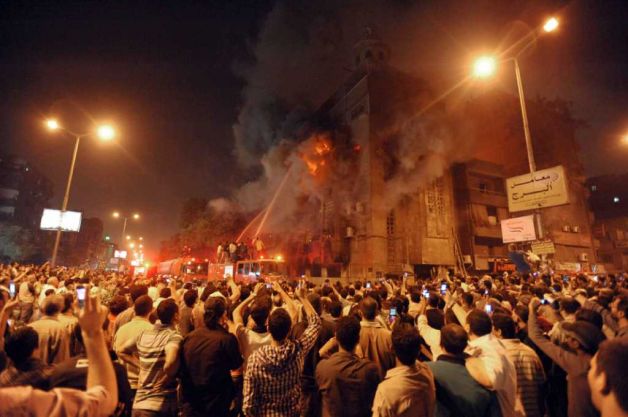 I was speechless. I realized immediately that I appeared to be something I wasn’t. I am not fearless nor am I a spiritual powerhouse. I’m a sinful man, filled with flaws, saved by Grace. I’ve often found myself praying for my safety as I’m surrounded by men who serve a false God like those in the bombing photo above. I’ve never been more ashamed in my life. God put me in that situation to pray for those men, and I prayed for myself instead. So, no . . . I’m not a man of great faith.

As God touched my heart that night and I prayed for the men around me, a strange thing happened. My fears vanished and I was filled with peace. I had been praying for a way out of the situation because Satan was whispering in my ear, “You’re going to die if you don’t leave here.”

But the moment I focused on the reason God placed me there, everything changed. God’s compassion for the lost is overwhelming. We cannot fathom the breadth of His love. The Grace He has given me He wants to give to them too. We have to tell them.

My heroes are men and women who have given their lives for others and to spread the Gospel to the lost. I strive to have that kind of faith, but I don’t. I’m also not trying to die for the sake of the Gospel and become a martyr. I don’t have a death wish as some have implied.

Contrary to what others have said, I’ve not taken a vow of poverty or sought dangerous locations to visit. I’m simply attempting to go where God wants me to go. Many of those destinations happen to be in war-torn, poverty-stricken, disease infested, violent areas of the world. That shouldn’t surprise anyone.

I’m not the only one in this situation. Many young men and women refuse to shy away from danger every single day, living in the direst circumstances just to spread the good news.

There are children dying in third-world countries from malaria and typhoid, parasites and violence. They’re drinking water that is so polluted one can see the movement of parasites in the bottles from which they’re drinking.

Adults are leaving their children orphans as they die from preventable diseases and parasites due to a horrible scarcity of medical care. Without exaggeration, many of them would have to walk for seven hours in the broiling heat just to find Tylenol for their baby’s fever. Even then there may be none available.

And the worst problem of all is that they’re dying without Christ. Many have no idea there is a God, let alone one they can actually know. Others believe they are worshiping God when they are only following after idols. They don’t know any better unless we tell them—unless we go.

There is no substitute for going, but I’m not doing it to please or honor man or woman—only to serve God—only to be obedient. And I’m not very good at that either.