WHAT IS THE GOSPEL OF MARY?

Was Jesus married? This seems to be the burning question of the day—again. 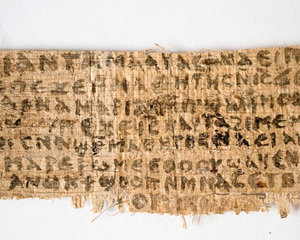 With all we read in God’s Word, have we reached the point where we pretend to look for the truth when we’re only looking for a reason to discredit the Holy Sovereign God of the universe?

The question of Jesus’ marital status likes to surface on a regular basis, as it did in Dan Brown’s best selling work of blasphemy, The Da Vinci Code, published in 2003.

Now comes another assault against Jesus, claiming that he was married based solely on a previously unknown scrap of papyrus the size of a business card, with writing in ancient Egyptian Coptic that states,

“Christian tradition has long-held that Jesus was not married, even though no reliable historical evidence exists to support that claim.”

But what she says next, is amazing:

“This new gospel doesn’t prove that Jesus was married, but it tells us that the whole question only came up as part of vociferous debates about sexuality and marriage.”

Did you catch that? She said, “This new gospel …”

I am disappointed that she, a distinguished professor of divinity, would not know that the Gospel of Jesus Christ cannot be replaced by any New gospel, including the old new gospel of Mary, an apocryphal book that is not part of the Bible. It does not matter how much you want to be interviewed on CNN, it just can’t happen.

We know from Scripture, that Jesus refers to the church collectively as His bride. Why then are we looking for a reason to say that He was married to a woman during his ministry on earth?

Many who have read or seen The Da Vinci Code, take the view that Mary Magdalene and Jesus were married as ‘gospel truth’, but it is not. Part of their support for such a view is what is written in the non-canonical gospels. These are accounts of the Gospel of Christ that were not written in the first century as Matthew, Mark, Luke and John were.

The Gospel of Mary, an apocryphal book that is non-canonical, is being referred to as a credible account of the life of Christ, but it is not, and never has been.

In his blog, Was Jesus Married? A Careful Look at the Real Evidence, Dr. Mark D. Roberts, Senior Advisor and Theologian in Residence of Foundations for Laity Renewal in Texas, makes the following statement:

“Most people are not familiar with the non-canonical gospels. Thus when they hear that these writings reveal Jesus’ marriage to Mary Magdalene, they are at a loss to evaluate this claim, and often accept it at face value. Many even assume that the non-canonical evidence for Jesus’ marriage must be strong and ample since some writers get so excited about it. In fact the actual evidence is both weak and scanty, as we’ll see.”

It’s important for us to understand (and be capable of intelligently addressing this issue with others) the evidence or lack thereof for Jesus being married vs. single. It is our responsibility to understand the body of evidence that supporters of the Da Vinci Code believe. That evidence is contained in the non-canonical gospels (not capitalized because they are not really Gospel).

One of the best articles I have read on this issue was written by Dr. Mark Roberts on his blog, Was Jesus Married? A Careful Look at the Real Evidence. I strongly recommend taking the time to read it and understand it. This new piece of papyrus proclaiming a new gospel will not go away anytime soon. The public and media love this debate. We need to know why we believe what we do, and how to discuss it with others intelligently.

There is no new gospel, no gospel of Mary—only the Gospel of Jesus Christ.

Question: Have you had this surface in your church?