The story below is a continuation and conclusion of the blogs Night Terror–Part One and Part Two from earlier this week. 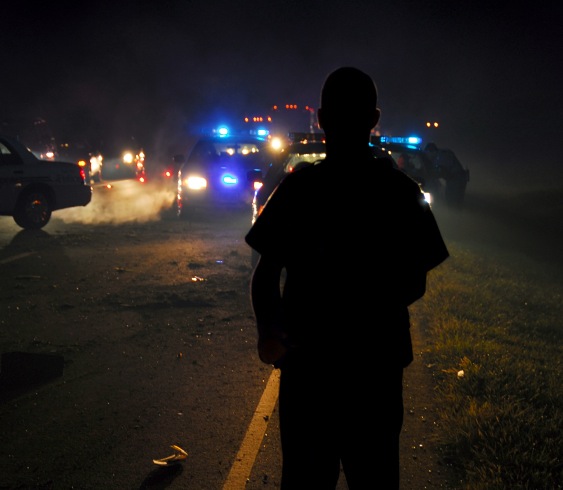 The groan of metal above seemed louder than the gasoline engine of the Jaws as they opened the windshield space to about 10 inches. Suddenly I was able to work Lisa’s legs loose from the wreckage, and could tell that they were injured.

Josh stuck his head back through the opening and said, “Hey, her ride is here!” I strangely welcomed his attempt at humor as the sound of the Life-Flight helicopter filled the air outside the twisted metal cubicle.

Josh thrust his arm inside to hand me a flashlight—for the first time I saw Lisa. She looked like a doll lying partly on the seat and partly on my lap. Her long brown hair lay in a tangle partly covering her face—I brushed it aside.

Lisa was unconscious, but she was breathing on her own and her heart rate was stable. I could now see that her injuries were significant. As I looked around the car with the flashlight, it was clear that the chassis was buckling in the center and becoming increasingly unstable.

“Can you get me a backboard in here so we can move her, Josh?” I was concerned that any attempt to carry her without immobilizing her neck could cause her more harm.

“We don’t have time. We need to go now!” He hollered back over the noise of the firefighters spraying the wreckage with foam. I have learned that when a firefighter tells you there isn’t much time—there isn’t much time. I could hear the Fire Chief barking orders to his men, “Cover this gasoline, every drop! Over here! If this goes, we can’t control this, gentlemen!” He turned to Josh, “Get them out of there!”

I pulled Lisa tight against me, protecting her neck from further injury the best I could. The crawl back to the front was slow as I did my best to be gentle. Josh guided me as he trained his light on the sharp metal edges I needed to avoid. I reached the dashboard and stretched out my arms, handing him Lisa’s limp frame. “Josh—take her—go!”

“I got her!” He assured me as he carefully scooped her up and hurried over to the police chopper waiting in the middle of the road. The cheers from a hundred bystanders were incredible as they celebrated this little girl’s life. Everyone crowded around the family to get them aboard the helicopter and on to the hospital.

I finished crawling out of through the windshield opening—but no one noticed as the chopper quickly left the ground. There was excitement in the air now that Lisa was alive.

As I walked to my car I asked a police officer if they needed my contact information, but he said no.

It was only a ten minute drive home from there. I took a shower and quietly crawled into bed beside my wife, being careful not to awaken her—it was 3 AM.

Countless times since that night I have played over in my mind how much happened without anyone knowing. The reason I ponder it at all is because the Lord is constantly saving us, and we don’t even realize it.

How often do we go through difficult times without thinking of, or counting on God’s provision—about the fact that He is there every moment, watching us, sending people our way to help us, or for us to help them? He doesn’t look in on us regularly to see if we’re okay—He is always there, always with us, always awake. There is never a time when He is not present.

God knows our needs before they happen and is faithful. But still at times—we find ourselves doubting Him and fearful of our circumstances. I include myself in this—I wish that were not true. Perhaps when we reach the point where we never doubt, it coincides with becoming the men and women God calls us to be.

As I learn to trust God more and more, I realize that my doubts often stem from my unwillingness to turn everything over to Him. In other words—I don’t trust what He is going to do. But God is not on trial—He is not auditioning for me to decide if His purpose is best, because His purpose is best. Jesus is Lord, regardless of what we think during a moment of crisis, or what Satan whispers in our ears–Jesus is Lord.

Ten years after that fateful night, an attorney contacted me. He was gathering information about the accident. I asked him about Lisa, and found that she had suffered a concussion in the accident, with bleeding into her brain, broken ribs, and a broken leg. My heart sank as he spoke.

The doctors had informed Lisa’s mother that because she was trapped for so long with her chest compressed by the debris, the oxygen supply to her brain may not have been sufficient for her to survive. For six days her family gathered at her bedside as she held tightly to life. On day seven—Lisa opened her eyes and smiled.

Although her recovery was slow, Lisa improved every day. I have never spoken to her or anyone in her family. I suppose I never will.